A Dose of Reality 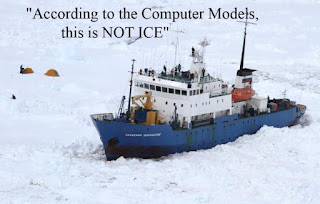 Most climate alarmists think reason and science are on their side and thus tend to have an arrogant attitude when dealing with climate skeptics.


They get annoyed when skeptics call their alarmist beliefs CAGW. They fight back saying the "C" is a "denier" plot but then we ask, if AGW is not catastrophic, why should humanity spend (waste) tens of trillions of dollars to "fix" something that ultimately may not be bad (if it is even being caused by our CO2 emissions)?

Also, with a perfectly straight face many alarmists underline that "climate action" requires the replacement of fossil fuels wholesale by (mostly) solar panels and wind turbines. And yes, many of them confuse "energy" with "electricity." The latter is only a fraction of our civilization's total energy consumption.

Here is where their boat, as it were, begins to thread water. Fossil fuel generating capacity cannot be replaced by solar and wind. At the most, these so called renewables can displace a certain number of hours annually of fossil fueled generation. However, the power plants themselves stay, as at any particular moment (that may well be during peak electricity demand) renewables may produce little or nothing. Solar PV produces nothing at night or when the panels are covered in snow. Their output is significantly curtailed during overcast days. Wind turbines' generation is more random.


Today, solar panels and wind turbines produce marginal amounts of energy globally and this energy for the most part is not even needed as reliable power plants need to curtail their output to accommodate these semi-random energy dumps.

So, these persons that believe reason and science are on their side promote an impossibility: replacing fossil fuels in a hurry with marginal, unreliable, energy sources that need to be paired with the same fossil fuels they want to replace. Obviously, they are not on the side of reason, they are not only denying reality, but engineering itself.

Fossil fuels have lost, and will continue to lose, market share. However their absolute use is still increasing led by natural gas which is currently the fastest growing fuel worldwide.

Yes, nuclear energy can replace fossil fuel capacity but many decades will be required for say, nuclear to supply 50% of the primary energy of our civilization.


So, fossil fuels are here to stay. If their CO2 emissions are a problem (that is worse than the benefits they provide) then reasonable solutions that do not contradict sound engineering and economics should be found. Maybe those "solutions" are just adaptations to a somewhat warmer planet.