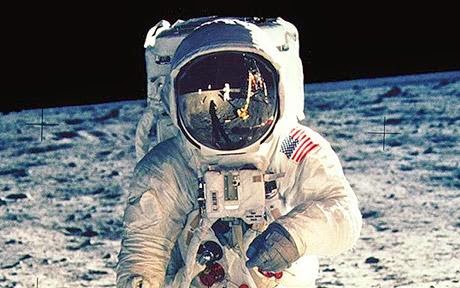 First let me state, off the bat, that I have no doubt the moon landings happened.  I mean, it was easier to put a man on the moon than, say, produce an iPhone (and that is why the iPhone came to be almost 40 years later).  Do we doubt the iPhone exists? I don't think so.

However, the reason I mention "the moon landing hoax" is to underline the difference between this discussion and Global Warming.

"The moon landing hoax" is purely an intellectual exercise. It doesn't matter if one side (or the other one) is right, you don't have to hurry to defend your pocket. It will cost you nothing whether it is one or the other.

On the other hand, in the Global Warming discourse things are very different and a lot is at stake.

If the alarmists win and end up directing energy policy, YOU personally could be ruined and thus your family will suffer the consequences.

Thus, if governments buy into the idea of dramatically cutting our fossil fuels use what would happen would be a catastrophic economic depression.

Companies would go bankrupt left and right, millions (maybe billions) would lose their jobs and prices of energy (and thus of almost everything else) would skyrocket.

In short, the Earth would not be able to sustain 7 billion persons today without abundant fossil fuels.

And one more time, off the bat let's say this: renewables will not dominate the energy markets. They require too much "material," they are intermittent and unreliable. They will continue to be niche players. Yes, nuclear conceivably could eventually take over, but "eventually" doesn't mean "soon."

So, bottom line, if there is a fringe that believes the moon landings were a hoax, let them alone, they hurt nobody. On the other hand the fringe that wants us to dramatically reduce our fossil fuel use in the short term could destroy the world's economy, create chaos, violence, suffering, hunger and death.

Whether we believe, or not, in climate change, it is in our own best interests to decidedly push back against those alarmists. Today, they seem to be winning the mind games. If they win, we all lose.

Thus, we cannot, allow them to win. If we need to be blunter and more aggressive, so it be.

Ed Darrell said…
And if the denialists win, you lose your pocketbook, your job, your home, your nation and planet.

A fork in the road: One way offers a difficult and rocky path we may not survive. The other, certain destruction after prolonged misery.

Which way to go?

You saw what Grist founder Chip Griller said when he confessed that global warming might be a conspiracy, right?

So-called “global warming” is just
a secret ploy by wacko tree-
huggers to make America energy
independent, clean our air and
water, improve the fuel efficiency
of our vehicles, kick-start
21st-century industries, and make
our cities safer and more livable.
Don’t let them get away with it!