This article is speculation, and yet, it is something to ponder about.

During millions of years, the concentration of CO2 in the atmosphere had been dropping. Actually the drop had been quite dramatic between the late Jurassic (more than 2,000 ppm) to recent times (less than 400 ppm). This is no fine tuning, the difference is in the range of five to one.

Important reserves of carbon in the form of ancient life remains had been trapped "forever" inside the Earth. These reserves were in the form of coal, oil and natural gas.

No natural mechanism could pump back to the atmosphere those "forever" sequestered amounts of carbon.

No natural mechanism...  but could the Earth naturally create unnatural occurrences to return to the biosphere that long lost carbon or, would the Earth itself slowly starve due to insufficient CO2 in the atmosphere?

It was inconceivable for any plant or animal species of the time to actually extract billions of tons of carbon from the Earth's inside and, at the same time, burn them. It was just inconceivable, unless... 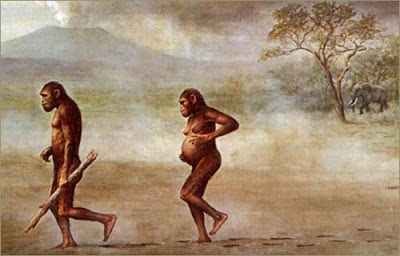 Unless an animal evolved with a brain that could eventually appreciate the benefits of fire and subsequently crave for more and more energy that will eventually make him knock at the gigantic carbon warehouses inside the Earth.

The project would take a few million years to be implemented but once it caught fire (literally) the replenishing of the atmosphere's carbon will be quite fast, almost an instant in the geologic scale: hundreds of years, at the most one thousand.

Is the replenishing of CO2 in the Earth's atmosphere THE purpose of humanity's existence?

Actually, it might not be the only purpose of our existence: another element that was reaching starvation levels in the biosphere was phosphorous and through the massive manufacture / utilization of laundry detergents by our civilization this scarce element is also seeing better days.

Returning to CO2, some may say: yes, it is healthy for CO2 levels in the atmosphere to increase, but the problem is the rate at which it is increasing. This speed was probably a gamble the Earth had to take because once you liberate a civilization on a planet, things change very fast and the window of opportunity doesn't last forever.

Nobody doubts that carbon is the most important element for life on Earth and it is not a particularly abundant element at that. Its abundance on the Earth's crust is only 0.18%. Aluminum, for example, is 45 times more abundant than carbon. However, plants can only process the carbon directly from the atmosphere (and animals ingest the carbon from plants).

If the above speculation is correct, then burning fossil fuels is more than correct, it is humanity's contribution to the continued health of the planet. (Albeit, the ride in the short term might be bumpy).

So maybe we shouldn't even feel guilty about burning fossil fuels. No, maybe we are just doing our job!

Tucano said…
It is a bit teleological saying that the purpose of humanity is to resupply Earth's atmosphere with CO2. Nonetheless it would be ironical that the burning of fossil fuels is what would ultimately preserve life as we know it on Earth. Interesting blog post.
1/01/2015 8:56 PM

Zuppi said…
An anthropocentrist would say that the purpose of all that organic matter buried in the Earth during millions of years is to proportionate fuel for the human beings to come!
2/09/2015 2:30 AM

Edward Metcalfe said…
I'd take the theory one step further and say our ultimate purpose is to spread life to Mars and beyond because this planet has a finite lifespan
1/07/2017 9:44 PM

Brian Catt said…
A significant amount of carbon is taken up by sea creatures to form the limestone and chalk in the oceans, which plates, and their carbon content as CO2, are recycled every 200 Million years or so through the million or so underwater volcanoes.

I just read that the lower limit for a reasonable range of trees is 200ppm, lower than that and we see extinctions of tree varieties. The suggestion was that this is one reason for the dust gathering on ice caps at the end of the ice ages, as CO2 levels drop below 200ppm in the deepest cold, and soil erodes as trees die off - a sort of ice age dust bowl caused by low CO2 levels. As a final note, on a quick check the optimum CO2 level for a commercial greenhouse is 1,000ppm. 400ppm is definitely a bit low.
10/15/2017 4:08 PM