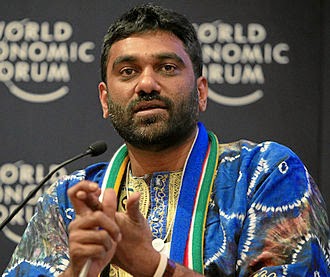 It seems to me that current "environmental leaders" don't preach by example. They travel all over the world (in airplanes, not in bicycles or wind powered boats).

Of what magnitude are the annual carbon footprints of Al Gore, Kumi Naidoo and of the newly minted green spokesperson, Leonardo DiCaprio?

In my opinion, trying to push the green agenda by jetting all over the world all the time is the equivalent of "smoking against tobacco," or "fast fooding against obesity," or "drinking against drunk driving."

No, we all should DEMAND higher standards from the "green leaders."

Here are some suggestions:

2. They should pledge never again to travel by plane. Nothing to negotiate here. If they need their faces to be seen all over the world, they can rely on video-conferencing.

3. Live in a small dwelling with little furniture in weather that requires no heating in winter and little cooling in summer. (I think Paraguay is beginning to look like the only viable option).

4. Don't own a car, what's more, they should do all their (local) transportation walking, or in a bicycle. (No public transportation since it is mostly diesel).

5. In general buy as little "stuff" as possible and for the most part concentrate mainly in purchasing food. No meat, though.

Sure, the above would corner them into living a dull life with little opportunities, but hey, this is exactly what they are trying to impose on all of humanity so, why not start with themselves?

a. Stop blocking that premier / scaleable / reliable / dense / low carbon energy: nuclear. Sure, current nuclear is not the greatest, but it is good enough while even better designs hit the market.

b. Move from a blanket opposition to GMOs to requesting that GMOs (on a one to one case) be properly vetted.

Today, what these environmental leaders seem to be saying is: "do as I say, not as I do."  This is NOT leadership.

We demand they do as they say.