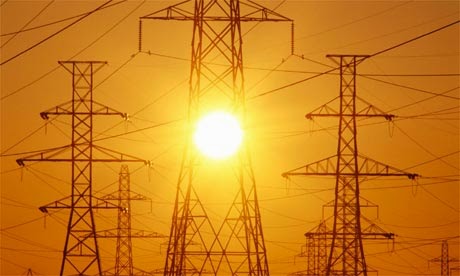 Let's make a first approximation on how much generating capacity we would need to supply the latter amount with low carbon sources.

I want to underline this is a simplification since we are just going to consider the average annual electricity consumption while in the real world:

1. Electricity use varies locally by the hour and throughout the year.
2. We don't have a single global grid and thus we need spare capacity all over the globe.
3. There will never be a single technology supplying all the electricity.
4. The cost of the kWh is paramount, so electricity supply is more an economic consideration than a technical one.

However, having said the above let's just make the calculations to arrive at a ball park figure per technology.

The average global annual consumption would be:

If supplied with 1 GWe nuclear power plants at 85% CF we would need:

However, it is important to note that both wind turbines as well as solar panels would require gigantic storage capabilities that would have to be added to the "material" above. All these devices would require massive mining operations.

Finally, we should consider that by 2040 only ~50% of our energy consumption will be represented by electricity. The other 50% is more difficult to replace with low carbon options.

Let's say (again, for simplification purposes) that we reach steady state consumption by 2040 and that nuclear plants last 60 years, wind turbines 20 and solar panels 25.  How many of each would we need to replace annually?

Feel free to add to the conversation on Twitter: @luisbaram